CONTEXT
Public misconception
The Capital Area Greenway system is a network of public open spaces and recreational trails that connect many of Raleigh’s parks. According to the city’s Parks, Recreation and Cultural Resources Department, the system serves the community as a “highly functional bicycle and pedestrian network” for not only recreation and environmental protection, but also transportation and as a cultural resource.
The city of Raleigh endeavors to develop the Greenway into a diverse, multimodal system and transportation network that links schools, shopping centers, parks, and places of employment. Although federal funds have been allocated for trail improvements, the system is primarily associated with outdoor leisure activities and is therefore, a severely underutilized resource. We have constructed a generative system for the Capital Area Greenway to alter the misperception of the trail, and encourage public use by addressing the core principles outlined by the city.

RESEARCH
Walking the path
To determine the points of access to Union Loop, we took to the streets, traversing 1.5 miles of vastly different scenery. We walked from Pullen Park To Dorothea Dix, through the historic residential neighborhood of Boylan Heights, past the future site of Raleigh Union train station and ended at CAM in downtown Raleigh.
The proximity and change in scenery felt surreal. In a 10 minute leisurely stroll, we went from Pullen Park, a bustling urban playground, crossed busy Western Boulevard into a quiet forest, and emerged into a bright open, suburban soccer field. However, it was strange because both parks were filled with people that day, but the paths between them were empty. We maybe saw 3-4 others using the trail the whole day. But at the same time, while we also know that the system exists, many of us have rarely, if ever utilized it and have a somewhat abstract notion that it is solely a recreational, walking path.

FINAL PRODUCT
Branding: cohesive across communities
To address the misperception that the greenway trails are solely recreational walking and biking paths, Union Loop, Raleigh Urban Trail System is branded with the intention of portraying the system as a city-wide network of shared-use pathways that offer a diverse range of experiences from physical to cultural.
We wanted the brand to convey a strong sense of community but rather than emphasizing the idea of a unified social collective, our brand aims to amplify and celebrate the diversity between Raleigh neighborhoods while creating enriched connections between individuals and their communities. It is a versatile system that can be used in a variety of contexts including wayfinding to large-scale, print campaigns and public outreach. 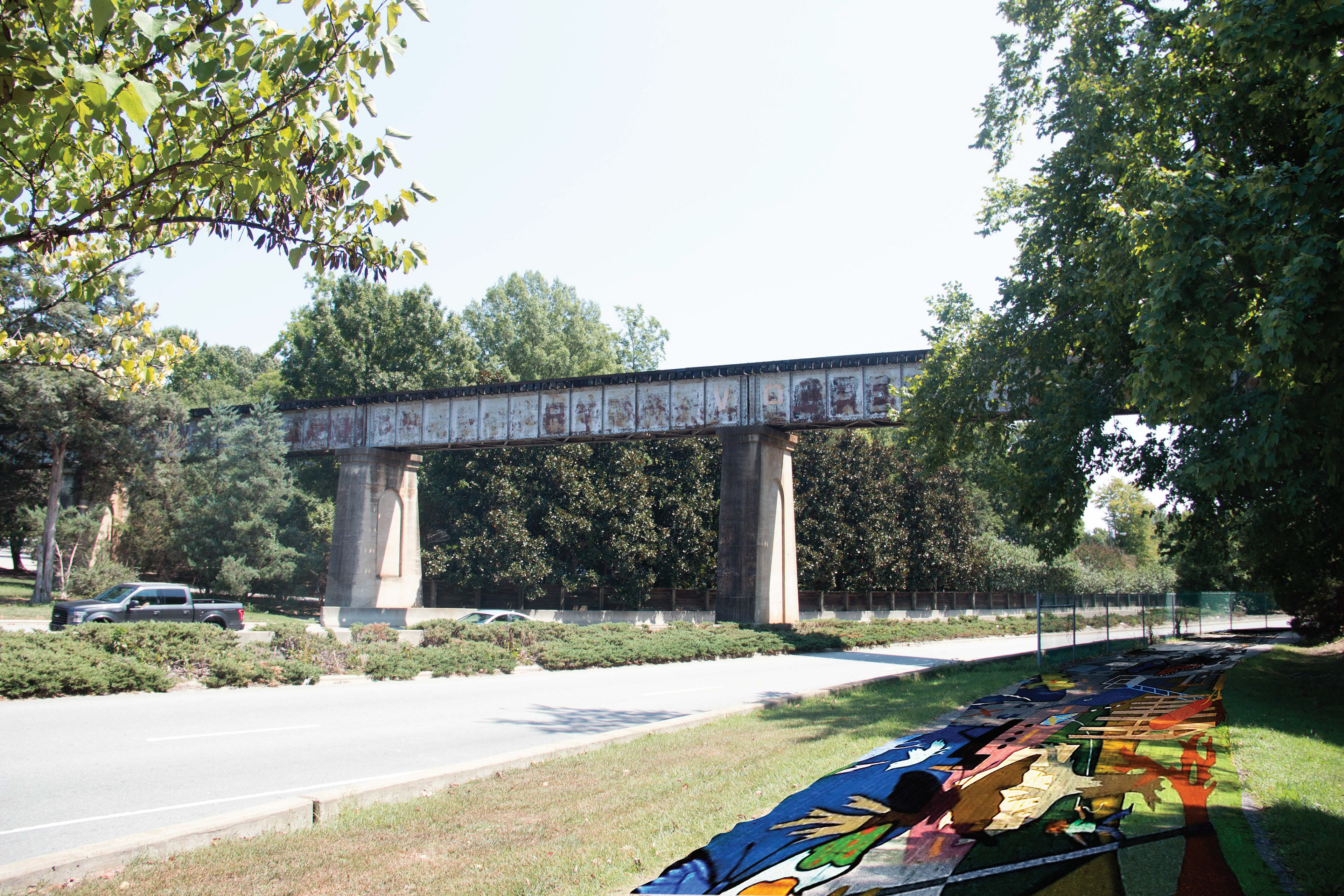 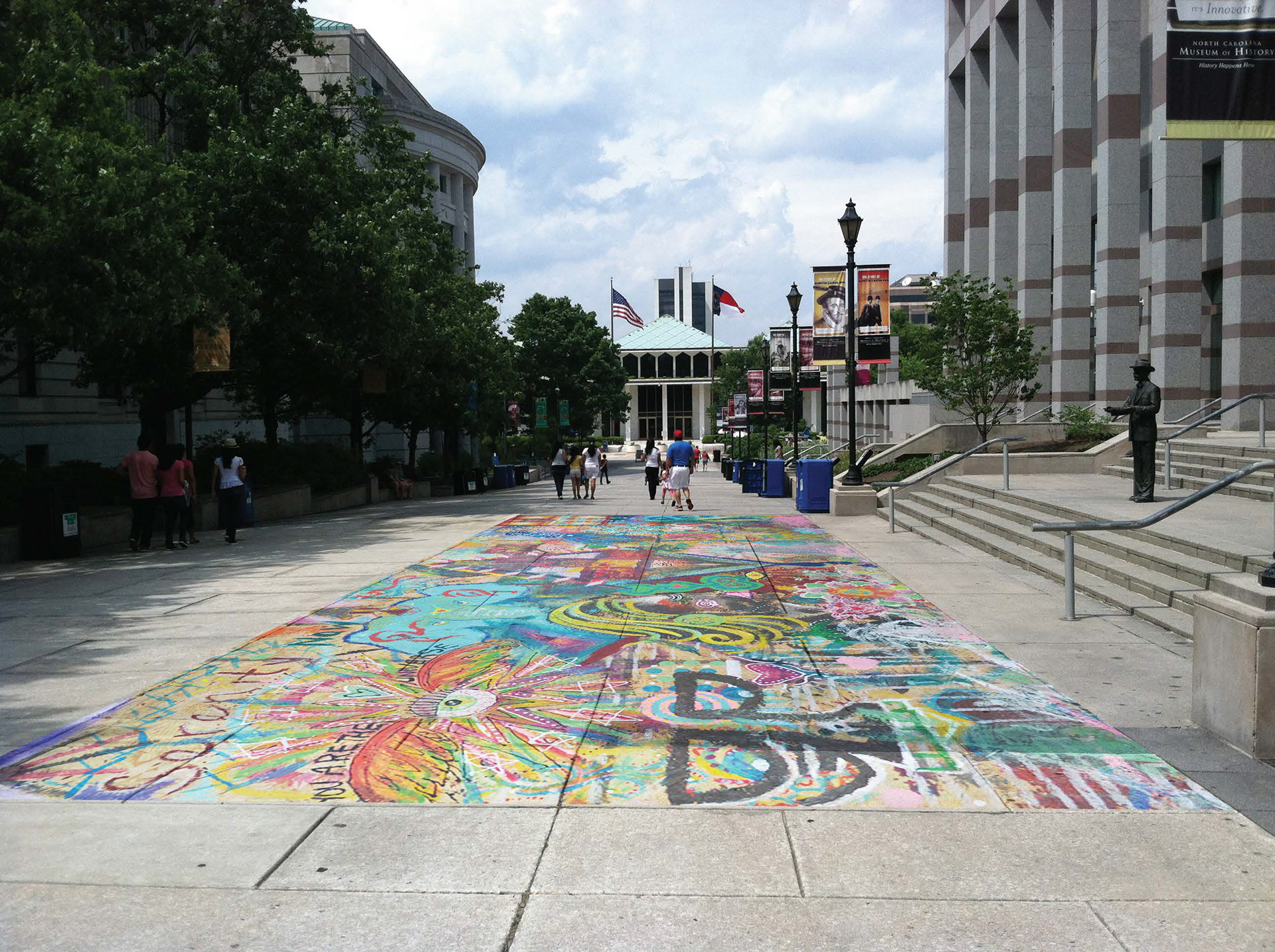 Murals: forming community identities
We strive to enhance the identity of Raleigh neighborhoods by creating the opportunity for residents to become placemakers. Similar to the “Paint the Pavement” initiative, we envision an event in which residents congregate to paint semi-permanent street murals along the Loop that reflect the current cultural climate of their neighborhoods.
Although each neighborhood creates a customized, unique visual identity, the overarching branding system conceptually integrates individuals into neighborhoods and neighborhoods into the larger community of Raleigh. The street murals also serve as an alternative form of wayfinding that suggests a reconceptualization of the definition of a neighborhood.  The murals as “signage” intimate that neighborhoods are defined by the people that comprise them rather than their physical locations. These murals placed in different points along Union Loop act as almost a brand for the area they’re placed in. People walking along the loop see the mural and get a feel for the area they are walking into and feel encouraged to walk around and explore.

App: exploring community identities
The app allows users to upload pictures of things characteristic of the community that they photograph through the app. Other users are able to see a feed of what their neighbors are uploading to the areas. Through a voting system throughout the year, the things that are most important to that community are then collated into an inspiration bank for a mural that is painted annually in that neighborhood. Once the user is in the same space as the mural, they can scan a code that opens an augmented reality viewer that they can interact with to see the inspiration points of the mural. This inspires people to get out into that community to explore and take pictures of their own.
UPLOAD: The app allows a resident to upload an image of an object, landmark, or scene that they feel is important to their community or the residents within. The resident could take a picture of anything from an architectural detail to a tree to a neighborhood block party. These images are then labeled, described, and uploaded to their respective area along Union Loop.
SCAN: The experience of exploration is encouraged and intensified by a gamification part of the app. When someone arrives at a mural, they are able to scan a unique code to that area.
AUGMENTED REALITY: This unlocks an augmented reality world where the user can select different parts of the mural and see the pictures that inspired it. The user is not able to see the current mural on the app, to encourage seeing it in reality, but they are able to see past murals. This presents an interesting timeline of how the community has changed.

Moving forward
Union Loop, Raleigh's Urban Trail System will become paramount in the next several decades as the city’s population continues to grow. By weaving together our social framework with our economic and environmental goals, the City of Raleigh will continue to flourish as a place to live, work, and play.
↑Back to Top